The Fire of Ares is a elemental power in God of War: Ascension.

In appearance, the fire is similar to Thera's Bane but the it's slightly less bright and much weaker, possibly having an equal magnitude to the flames emitted by the Blades of Exile. The original Blades of Chaos from God of War: Chains of Olympus and God of War emitted more flames although did not give the extra damage boost that the Fire of Ares boast. The Fire of Ares yields Gold Orbs when used to burn enemies. 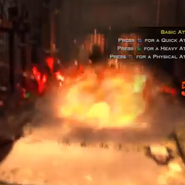 Retrieved from "https://godofwar.fandom.com/wiki/Fire_of_Ares?oldid=75697"
Community content is available under CC-BY-SA unless otherwise noted.