Powerful, able to attack with its arms, can produce shock-waves by pounding the ground, can charge, has the ability to jump long distances, can lift giant boulders and throw them

Fierce Ogres are a more powerful and dangerous sub-species of Ogre that can be found in God of War (2018). Much like their normal counterparts, Fierce Ogres are very powerful enemies capable of doing significant damage to Kratos when in battle. More so considering that Fierce Ogres are far more aggressive in terms of their attacks, making them quite a different foe to face. If beaten down enough, Fierce Ogres can also be ridden similarly to normal Ogres.

In terms of the mythology, Ogres are not mentioned by name, but they can be equated with Trolls and Giants in terms of their physiology and behavior. Because of their aggressive behavior, they were usually steered clear of.

Fierce Ogres possess the same attacks as the standard Ogre. However, due to their aggressive nature, these Ogres have an array of totally new and unique attacks, making them a bit more difficult to deal with. Fierce Ogres can leap at Kratos from a large distance, a similar but faster attack than the standard Ogre charge. Another long distance attack is one where an Ogre will pull an enormous boulder from the ground and launch it at Kratos. This attack can also be done in succession a few times if the Ogre is hurt badly enough. If Kratos approaches too close however, the Ogre will sometimes grab him and smash him into the ground, which can cause devastating damage. Aside from the attack differences, Fierce Ogres also have a bit more defense and health than the normal Ogres, and take more time to wear down. 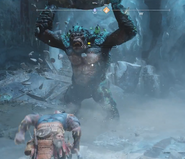 Retrieved from "https://godofwar.fandom.com/wiki/Fierce_Ogre?oldid=108878"
Community content is available under CC-BY-SA unless otherwise noted.