Start a Wiki
watch 02:27
The Loop (Games)
Do you like this video?
One of the most powerful minions of the Sisters of Fate, the Fates Juggernaut is a force to be reckoned with.

It is adorned in thick golden armor, and carries a massive flail. It also moves quite fast for its size, and attacks Kratos by attempting to pummel him with its flail. In order to destroy the monster, Kratos must first chip off parts of its armor.

After weakening the enemy, Kratos can stab his way up on the beast, and climb it until he impales its shoulders. From there he then leaps over its head, twisting the chains and pulling back, thereby decapitating the Juggernaut. Killing it in this way will give Kratos some gold orbs, as well as a few green ones.

Juggernauts appear few times in the game, and only near the end of it, such as in the Arena of the Damned and the path to the Loom Chamber. They always are encountered in pairs or groups, and always fight alongside other creatures, such as Hades Fiends, Fates Guardians, Satyrs, Cerberi Breeder and Cursed Legionnaires.

There's also another very similar enemy, called Hades Juggernaut, who shares a similar armor and weapon and is killed the same way. The differences are that the Hades Juggernaut's armor is dark, his flail is covered in flames and they are much weaker than the Fates Juggernaut. 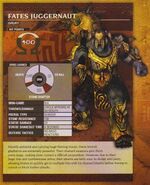 Fates Juggernaut
Add a photo to this gallery

Retrieved from "https://godofwar.fandom.com/wiki/Fates_Juggernaut?oldid=106439"
Community content is available under CC-BY-SA unless otherwise noted.