The Draugr (plural: Draugar) are Norse monsters that appear in God of War (2018).

Draugar are undead warriors that died in battle, but blinded with anger, refused the call of the Valkyries to Valhalla, usually due to their desire for revenge. Engaging the Valkyries in a duel, the warriors are burned by the intensity of the fight, and doomed to forever roam Midgard in rage as a husk of their previous selves. 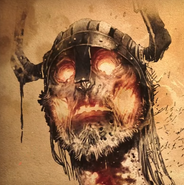 Add a photo to this gallery
Retrieved from "https://godofwar.fandom.com/wiki/Draugr?oldid=97472"
Community content is available under CC-BY-SA unless otherwise noted.