Delos is an island that Kratos travels to in God of War: Ascension.

Delos is a Greek island and the famous birthplace of the twin gods Apollo and Artemis. The island was created Leto's sister Asteria who fled to the sea and changed into an island to escape from Zeus. When Leto was pregnant she came to the island of Delos because Hera made all the lands shunned her. While in childbirth Leto was hunted by the dragon Python sent by Hera to kill Leto and her children. Artemis was the first born and helped her mother give birth to Apollo, who tracked down and killed the monster that hunted his mother.

Delos appears in God of War: Ascension when Alecto, in her beast form, is seen attacking the island and destroying the ships that surrounded it. Afterwards, Kratos uses The Amulet of Uroborus to rebuild an elevator previously destroyed by Alecto.

In the island lays the Statue of Apollo, a huge half-decayed monument, that later is rebuilt by Kratos, in order to reach the lantern of the statue. The island witnessed the journey into insanity and, consequently, the death of Archimedes, who projected the statue. 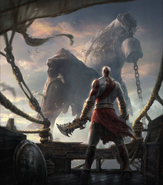