View source
watch 02:59
Metroid Dread - The Loop
Do you like this video?
Play Sound

The Death Eater is a Stone Troll that has been resting in a hibernation-like state in a small beach near Týr's Temple. It's unknown for how long, but since the traveling Giantess Laufey the Just never mentioned anything noteworthy about him, the Death Eater must have been asleep for an unmeasurable amount of time.

Both Kratos and Atreus can arrive at the beach where the Stone Troll rests, but they are incapable of interacting with the statue-like sleeping Troll. It isn't until the defeat of the two Grendels guarding the Black Rune of Jötunheim deep inside Týr's Vault that the Death Eater finally awakens from his slumber.

The Stone Troll will roam the beach until the two Gods engage him in combat. Despite the Death Eater's strength, both the old and young Gods prove to be stronger and defeat the Stone Troll.

Being a Stone Troll, the Death Eater possesses a strength and endurance surpassing the common flesh Trolls.

In a similar manner to the Grendels, he too can generate blinding ash from his hands and swing around his totem with great speed and force, but the amount of blinding grenades he can create by slamming his totem to the ground is much greater. 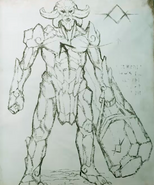