God of War Wiki
Register
Don't have an account?
Sign In
Advertisement
in: Males, Trolls, Enemies,
and 3 more

He is encountered in the Wildwoods after Kratos takes Atreus hunting for the first time. Atreus tracks and successfully hunts a large deer, however, that catches the attention of Dauði Kaupmaðr, who picks up the dead deer and tosses it aside.

They engage in battle against the Fire Troll, but he is eventually defeated when Kratos beats him up and snaps his neck. It was his sudden attack what drove Atreus to a fit of rage, leading Kratos to believe his son was not ready for their journey.

As a Fire Troll, Dauði Kaupmaðr imbues his attacks with the burn element, torching the surrounding environment with each attack. 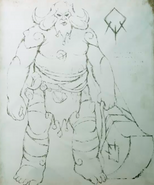