The Cyclops Remains was an undead Cyclops Kratos encountered on top of the great Titan Cronos.

While battling his way upwards on Cronos' arm, the Cyclops appears tearing his way out of an open wound on the Titan's shoulder. Much like his Berserker counterpart, this Cyclops can be mounted and controlled by stabbing its shoulders and back repeatedly.

With the Cyclops under his control, Kratos batters the flesh of the now open wound it appeared from, until the titan spots both of them on his shoulder and tries to shake them off. The Cyclops grabs on one of the metallic structures on the shoulder with one of its hands, and while it tries to hold on, Kratos stabs its neck multiple times before stabbing its eye, which doesn't kill it. Finally, Cronos grabs and swallows both it and Kratos whole.

While sliding down Cronos' esophagus, Kratos meets the creature once again, holding on it to avoid falling. Kratos makes it release the esophagus and fall to its death, gaining red orbs for it. 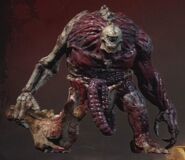 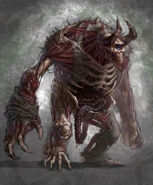 Retrieved from "https://godofwar.fandom.com/wiki/Cyclops_Remains?oldid=109346"
Community content is available under CC-BY-SA unless otherwise noted.