A Cyclops Enforcer is the first type of Cyclops that Kratos encounters in the God of War series.

Parts of their body are covered in thick, spiked armor. Their right hand has been removed, and is replaced with a giant spiked ball attached to a cord hidden within its forearm. They attack Kratos by charging at him, and then striking at him with their spiked ball, or by picking him up, throwing him to the ground and crushing him with it.

After weakening them enough, Kratos can start the killing sequence by punching it in the groin, rolling between their legs, climbing up their back, leaping into the air, and finally coming down on their head with two fatal eye stabs.

Kratos encounters these beasts once again in God of War III, in which they appear identical to how they did in the first title. With that in mind, Kratos should also use the same strategies he used to take them down.

They are killed in exactly the same manner as the first game, but this time Kratos can destroy their helmets.

They are encountered twice, in the outskirts of Chamber of the Flame and during the second visit to the Caverns of Olympus. 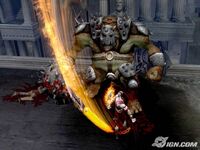 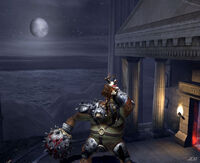 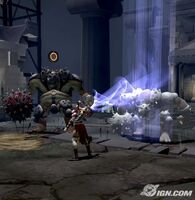 Kratos petrifying the Cyclops with the Medusa's Gaze. 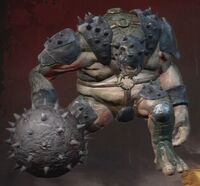 Retrieved from "https://godofwar.fandom.com/wiki/Cyclops_Enforcer?oldid=106158"
Community content is available under CC-BY-SA unless otherwise noted.