Start a Wiki
watch 02:27
The Loop (Games)
Do you like this video?
The Cyclops Desert King is one of the most powerful and dangerous of all the Cyclops that Kratos fights in God of War.

It appears as a very large cyclops covered in spikes. In its right hand, it carries what appears to be a gigantic bloodied spinal bone, which it uses as a club. It attacks Kratos by swiping at him with its weapon, or by picking him up and throwing him about. The Desert King may have been in the employ of the gods, seeing as how they can only be found on Pandora's Temple.

Kratos only encounters these Cyclops at a few points in Pandora's Temple: near the entrance of the Temple, in the Challenge of Poseidon, and near the Architect's Tomb.

Upon weakening it, Kratos can brutally kill the monster by punching its private, rolling under its legs, stabbing it in the scrotum, climbing up its back, swinging around its shoulder and impaling it near its neck with his blades. He can then slide down splitting its chest open, effectively killing the Cyclops instantly. 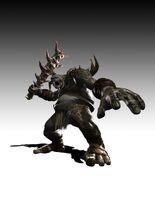 Add a photo to this gallery
Retrieved from "https://godofwar.fandom.com/wiki/Cyclops_Desert_King?oldid=106159"
Community content is available under CC-BY-SA unless otherwise noted.