God of War Wiki
Register
Don't have an account?
Sign In
Advertisement
in: Characters, Males, Titans,
and 8 more
English

Cronos (also spelled Cronus or Kronos), was the leader and last of the mighty Titans who were born to Gaia and Ouranos. He fathered the first of the Olympians with his wife Rhea. He fought in the Titanomachy where he was overthrown by his son Zeus. His punishment by Zeus after the battle was to forever carry Pandora's Temple on his back in chains. He is a minor character in God of War, a minor ally in God of War II and a major antagonist in God of War III.

In the beginning, the mighty Titans were sired by the union of Ouranos and Gaia. They were all born on the Island of Creation, home to the Sisters of Fate. Above any other beings, including the Titans, the Sisters of Fate were gifted with the very power of natural order and manipulated the threads of life and death of all living things, and thus could shape the fate of every god, beast or titan at their whim. The Titans feared the Sisters of Fate for this and left the Island of Creation to rule the mortal world. This marked the beginning of the Golden Age of Mankind.

Cronos, the mighty ruler of the Titans, was prophesized to be overthrown by his own children in the future. To prevent this from coming true, Cronos tried to bribe the Sisters of Fate into changing his destiny by granting them the Steeds of Time. However, this gift would not prevent the prophecy from coming true, for the Fates only listened to their own council, present or no present. In a second attempt to prevent this from happening, his wife, Rhea, bore his children and one by one he swallowed them whole, imprisoning them within his belly. Rhea could not bear another loss, for she already had five children taken from her. When the sixth child was born, Rhea called upon an eagle to take the baby far away from the watchful eyes of Cronos. In the baby's place, Rhea wrapped a stone in cloth and offered it to Cronos, who foolishly believed it to be the baby and swallowed it whole.

Unknown to Cronos, the sixth child was raised under Gaia, who was also disapproving of her son's cruel treatment of his children, thus nurtured the child's desire to one day free his siblings from his father. When the sixth child, now known as Zeus, came of age, he freed his brothers and sisters from Cronos. Now declared themselves as the Olympians, they would ultimately declare war against the Titans, including the one who saved Zeus from a terrible fate, Gaia. The mighty Titan Atlas was the military leader of the Titans in their epic battle against the Gods. Mountains were hurled like pebbles and tremendous earthquakes shook Greece. Cronos had almost been defeated by having his soul taken by his son Hades, but was saved by Atlas, who was defeated by Hades and Poseidon. After Zeus created the Blade of Olympus a powerful weapon, the Titans were banished to the darkest pits of Tartarus to endure great suffering for all time, but Cronos would be granted another great fate in that time.

Not wanting to store Pandora's Box in the Flame of Olympus, which would require the sacrifice of Pandora to retrieve anything stored within the flame, Hephaestus lied to Zeus saying storing it on Cronos' back would be a much safer place since defeating Cronos is no easy task.

Believing Hephaestus, Zeus, Hades, and Poseidon ordered Pathos Verdes III to construct Pandora's Temple on top of Cronos, by chaining him down and constructing it on top of him. He was then forced to wander the Desert of Lost Souls with Pandora's Temple chained to his back forever until the spinning sand rip his flesh of his bones. As suggested by Hephaestus, it was hinted Cronos was supposed to kill anyone who tried to obtain Pandora's Box, but it is implied he defied this order and allowed anyone to attempt to use Pandora's Box to destroy Olympus. When the Titan Horn would be blown, Cronos would be called upon to allow countless warriors to endure the many dangers which lurked within the temple. Above all warriors, Kratos, the Ghost of Sparta, was responsible for completing the many feats within the temple and even retrieving Pandora's Box so he could kill Ares, the God of War, for tricking the Spartan into killing his family. Kratos was successful at retrieving Pandora's Box, but Ares sensed that Kratos had the Box and hurled a pole at the Spartan, killing him. Ares then had his Harpies take Kratos to the Underworld and bring the Box to him. After Ares was killed and Kratos became the new God of War, Zeus became consumed with fear and banished Cronos to the pits of Tartarus so that the Titan is tormented for all eternity. That happened because Zeus blamed Cronos for Kratos's success on finding Pandora's Box.

In one final act of defiance, Cronos cursed Kratos stating "I should have expected this from a coward such as yourself! A coward who kills his own kin!" Kratos indeed killed his grandfather, Cronos, and sought to kill his father, Zeus. However, Cronos had turned on his own offspring centuries before by imprisoning them in his stomach, making his condemnation rather hypocritical. The Spartan ignored him and stabs his forehead, lethally wounding him. Cronos then slowly collapsed on the ground and died.

Cronos, much like his son Zeus, was very power hungry and paranoid, as he destroyed his father Ouranos, only so he could replace him as the new ruler of the universe, but became deeply afraid of his own children, fearing that one of them would overthrow him, swallowing any of his children moments after they were ever born. However, he seems to care for his titan brethren, unlike his son Zeus, who hardly cared for any Olympian, (though only after being infected by the evils) as he was ready to kill Kratos for supposedly killing his mother Gaia.

After being defeated during the Great War, forced to carry Pandora's temple on his back and then imprisoned in Tartarus to suffer for all eternity, Cronos became extremely enraged, feeling a deep hatred for Kratos, blaming him for Zeus's wrath and Gaia's supposed death, refusing to even listen to Kratos' reasons.

Unlike other foes, he doesn't underestimate Kratos since he knew the Spartan could defeat a Titan by himself. When overpowered by Kratos, he begged the latter to spare him since they were family but when that was ignored he (ironically and defiantly) called him a coward who slaughters his own.

Cronos possessed extreme strength and stamina, which can be attributed to his massive size. As King of the Titans, he is the biggest and most powerful from them, and his physical prowess was arguably almost as great if not completely matched with Atlas. He was also the only Titan brave enough to stand up to his father Ouranos, dismember him, and become the new ruler of the world. Standing at 1600 feet tall, Cronos is easily the largest titan in the God of War series. 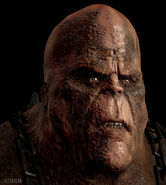