The Chimeran Armor is a set of armor available for Multiplayer as free DLC. It's based on the mythological beast Chimera, and also one of the most elaborated sets of armor.

The head protection is composed of a normal battle helmet that had is frontal part removed for a goat skull to be put in its place. Since the skull has three large horns and even a very short one right on the forehead instead of only two, it's most likely the skull of a Chimera, and not of a normal goat.

A large brown metallic armor protects the warrior's shoulders, torso and a large "roaring" lion face sculpted on the abdomen. Green snakes are also sculpted, coming from the frontal part of the upper armor and going back to the warrior's spine. The right forearm is protected by a green reptilian paw with large claws and the left one, by a golden plate.

The leather belt on the waist has another green snake sculpted on it. The loincloth, which is apparently made of goat leather, has another golden plate on it. Finally, the boots are made of leather with some drawings on it and two small claws come out of each one.

Once a physically offensive armor set, the Chimeran Armor is now one of the best choices in terms of elemental power, although Zeus offers more powerful armors to his best followers. A warrior can rely on this set to greatly enhance his magic attacks. 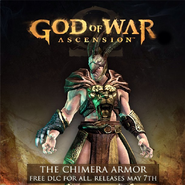 Retrieved from "https://godofwar.fandom.com/wiki/Chimeran_Armor?oldid=93015"
Community content is available under CC-BY-SA unless otherwise noted.