Chaurli is the giant tortoise that lives above Freya's home, as thanks for having saved her, since she was confined to the forests of Midgard, without escaping from the Aesir. 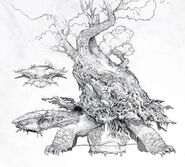 Add a photo to this gallery
Retrieved from "https://godofwar.fandom.com/wiki/Chaurli?oldid=118086"
Community content is available under CC-BY-SA unless otherwise noted.