The Champion's Hammer is a weapon for God of War: Ascension Multiplayer. It is sold in a separate DLC, unlike the Champion's blade and armor.

The Champion Hammer is a typical stone hammer, decorated with golden lines. The sides showcase small gaps. In the middle of the hammer, there is a green jewel embedded, the Eye of Circe. If the weapon has any other relation with Circe is unknown. 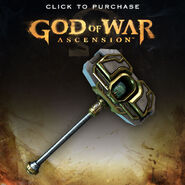 Retrieved from "https://godofwar.fandom.com/wiki/Champion%27s_Hammer?oldid=93029"
Community content is available under CC-BY-SA unless otherwise noted.