However, the blade requires an infusion of godly power in order for it potential to be truly unleashed.

It also appears in God of War III, as part of the magic ability of Blades of Athena (Divine Reckoning). Kratos planted the sword on top of Gaia's back during the Titans' siege of Olympus. When both he and Gaia were thrown off of Olympus, Kratos wedged it into Gaia in an attempt to hold on but both he and the blade fell into the Underworld. Later, when Kratos retrieved the Blade from a statue of Pandora in the depths of Hades, he was able to use it as a part of the Rage of Sparta. The Rage of Sparta is then the only means by which he may use the Blade of Olympus. Nonetheless, the Blade proved quite useful and strong in defeating some of the major opponents encountered over the course of the game. It was used to slay Cronos and Perses as Kratos journeyed through the Underworld and Olympus, and in the final battle, it was used to kill both Zeus and Gaia. In the very end, Kratos ultimately used the blade to stab himself, thus releasing the power of Hope that dwelt within him, as well as the power within the Blade itself, which it is now useless. In addition, it appears that the Blade of Olympus is akin to Zeus' Master Bolt, as it is the most powerful weapon in the world, and it, rather than the iconic lightning bolt, is seen with Zeus in most statues. 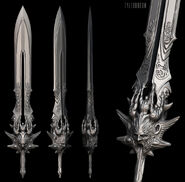 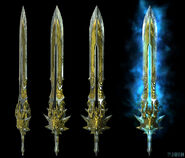 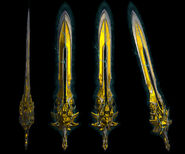 Add a photo to this gallery
Retrieved from "https://godofwar.fandom.com/wiki/Blade_of_Olympus?oldid=91612"
Community content is available under CC-BY-SA unless otherwise noted.