God of War Wiki
Register
Don't have an account?
Sign In
Advertisement
in: Characters, Females, Protogenoi,
and 5 more
English

the Sisters of Fate

Atropos is one of the three Sisters of Fate, the oldest sister and the cutter of threads who ends the life of everyone with her razor-like claws, be they mortal or god. She is defeated along with her younger sister, Lahkesis, when Kratos traps them inside their own mirror and shatters it.

In Greek mythology, Atropos was the Sister of Fate who ended mortal's lives by cutting their thread of life. She is the most well-known sister due to her job. Atropos was the smallest in stature, but the oldest and some believe, more powerful and cruel. Once those ends are cut by her razor-sharp scissors, it is impossible to tie them back together. She is known to the Romans as "Morta".

Atropos is the oldest Sister of Fate. Perhaps the cruelest of the sisters, she has the power to alter the histories of anyone she chooses. After Kratos defeats Lahkesis, who refuses to help him, Atropos reveals herself as she grabs Kratos and uses the mirrors to bring him to the past, where he battled Ares. On top of the Blade of the Gods, the sword that allowed Kratos to kill Ares, Atropos attempted to change Kratos' fate by destroying the sword which would kill the past Kratos and erase the current one from existence. Atropos battled Kratos and was eventually defeated, being left trapped in the past. When Lahkesis attacked once again, Atropos was partially freed from her mirror prison. However, the two sisters were not able to kill Kratos, who used the Amulet of the Fates to give himself enough time to beat Atropos back into the mirror. Kratos then proceeded to shatter it, leaving Atropos unable to help her sister for a time. In the end, Kratos defeated both Atropos and Lahkesis at once when the former attempted to hold him still, only for Kratos to escape and trick Lahkesis into stabbing Atropos instead. Kratos then used the sisters' last inter-dimensional mirror to trap them inside before shattering it, imprisoning them both for good.

Atropos is the cruelest of the three sisters. She believes that she can control anyone's life and is extremely proud of her status as a Fate, as she greatly enjoys taunting those around her by threatening to cut their threads and end their lives in an instant. Further giving to her vast arrogance, she believes herself to be far more powerful than both Clotho and Lahkesis and constantly enjoys toying with the fates of anyone, mortal or immortal alike, as if they were her playthings.

Atropos is the second tallest of the sisters. She wears a long dark-clothing and has razor sharp claws. She also has golden armor, and helmet. Like her sisters, she has long white hair.

As one of the Sisters of Fate, Atropos is more powerful than the Gods, than the Titans, than anyone in the mythological world and possess a certain amount of powerful abilities. 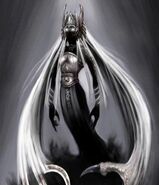