Leonidas I ("son of the lion"; born approximately 540 BC, died 480 BC at the Battle of Thermopylae), also known as "Leonidas the Brave" was a Greek hero-king of Sparta, third son of King Anaxandridas II of Sparta, who was believed to be a descendant of Hercules, possessing much of the latter's strength and bravery.

King Leonidas is notable for his leadership at the Battle of Thermopylae with only 300 Spartans against the massive forces of the Persians. Leonidas was killed, but the Spartans retrieved his body and protected it. The orders of Xerxes I, then ruler of Persia, were to have Leonidas' head cut off and put on a stake and his body crucified, out of his hatred for the defiant king of Sparta. This act was considered sacrilegious to the Spartans.

Donning King Leonidas's red cape, iconic helmet, and armour, the player will be able to make their multiplayer warrior look like the famous Spartan king from the blockbuster film '300'. King Leonidas is equipped with his famous spear and shield that has its own unique set of moves and abilities. It is not confirmed if the King of Sparta in God of War: Ascension was, in fact, Leonidas, but it is a plausible hypothesis. 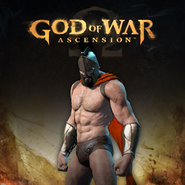 Retrieved from "https://godofwar.fandom.com/wiki/Armor_of_Leonidas_(Multiplayer)?oldid=79432"
Community content is available under CC-BY-SA unless otherwise noted.