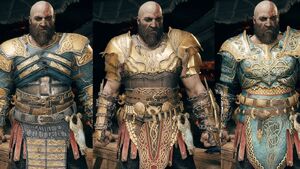 Armor Sets consist of a combination of wrist, chest, and waist armor in God of War. Kratos can uncover armor from chests around the world, by defeating powerful enemies, and by purchasing it from the shops of Brok or Sindri. Armor pieces vary in rarity from Common to Epic.

Armor can be upgraded with resources by Brok or Sindri for a Hacksilver price. Upgrades are limited to the number of empty levels next to the item's level.

Armor sets can create boosts in any of these six stats: