God of War Wiki
Register
Don't have an account?
Sign In
Advertisement
in: Characters, Males, Greek Gods,
and 6 more
English

N/A
Apollo is the Olympian God of Light. He is the son of Zeus, and twin brother of Artemis. Despite his status in mythology, he has never appeared in person in the series.

Apollo was one of the most versatile of the Greek gods. His domains extended from poetry and music, to light and truth, and archery.

His mother was the Titan Leto, whose tryst with Zeus angered Hera. The Queen of the Gods tormented Leto, sending the monster Python to chase her across the whole world so she could find no safe space to bear her children. However, Leto found safe haven on the isle of Delos and gave birth to Artemis and then Apollo.

Days after his birth, Apollo tracked Python back to its nest at Delphi and slaughtered the monster in revenge for his mother. He then stormed Olympus itself, causing the older gods to rise in panic as he entered the great hall with his bow drawn. Zeus, however, welcomed his son and honored his prowess, and Apollo joined the Olympians.

Apollo had many lovers and children. Perhaps the most famous is Asclepius, a demigod so skilled in medicine he could even revive the dead, which angered Hades. At his brother's request, Zeus killed the healer with a thunderbolt. Apollo, furious at the killing of his son, slaughtered the primordial Cyclopes who had forged Zeus' thunderbolts for the Great War. As punishment, Zeus made his son mortal and forced him to live in servitude on Earth for a year.

As the god of music, Apollo was also the leader of the choir of Muses. Hermes created the lyre for him, and the instrument became a common symbol of Apollo.

Apollo does not have a champion in the Wager of the Gods, but it is revealed that in his first journey to retrieve the Ambrosia, Kratos was given Apollo's Flame by a mysterious Healer. The flames would guide Kratos to the Tree of Life, and, years later, would help him in battle when he used it to kill Gyges.

Although the god is never seen, numerous artifacts honor his deeds and role. A mural in The Temple of Delphi honors his victory over Python, and the Oracle herself rested on the hands of a statue of the god. Later on in the game, Kratos arrives at the island of Delos, where a truly enormous Statue of Apollo had been constructed by Archimedes in his honor. Though it had fallen into decay, Kratos restored the statue to its full glory by using the Amulet of Uroborus.

Apollo's famous Bow appears in the possession of Peirithous, a former hero imprisoned in the Underworld by Hades. Apollo himself however remains absent from the game and, aside from his bow, is not mentioned at all. Apollo is one of the few Gods to have escaped the genocidal rampage of Kratos. Despite this seemingly good fortune his ultimate fate is unknown.

The same costume from God of War III is featured as downloadable content, though it is renamed "Warrior of Apollo". 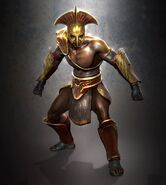 A statue of Apollo deep within The Tower of Delphi.

Concept Art of the statue of Apollo

A carved image of Apollo on the Statue Worker's Idol. 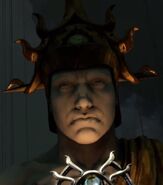 A statue of Apollo in the Temple of Delphi. 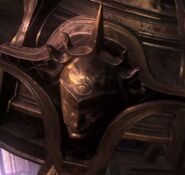 Apollo's mural in the temple.