God of War Wiki
Register
Don't have an account?
Sign In
Advertisement
in: Greek Goddesses, God of War, God of War III,
and 6 more
English

Goddess of Love and Beauty
Goddess of Pleasure and Happiness
Goddess of Sexuality, Desire, Seduction, and Procreation

Aphrodite is the Olympian Goddess of Love and Beauty, and one of the many supporting characters in the God of War series.

In Greek mythology, Aphrodite is the goddess of Love, Beauty, Seduction, Pleasure, and Happiness. There is more than one story about her origins. According to Hesiod's Theogony, she was born when Cronus cut off Uranus's genitals and threw them into the sea, and she arose from the sea foam (aphros). According to Homer's Iliad, she is the daughter of Zeus and Dione. Because of her beauty, other gods feared that their rivalry over her would interrupt the peace among them and lead to war, so Zeus married her to Hephaestus, who, because of his ugliness and deformity, was not seen as a threat. Aphrodite had many lovers - both gods, such as Ares, and men, such as Anchises. One day, the sun god Helios caught Ares and Aphrodite in their affair. When he told Hephaestus, the smith god decided to plan his revenge. He created an invisible net, which he set over the marriage bed. No sooner had Hephaestus left their home, that Aphrodite called her lover and Ares snuck into the house and in bed with the naked goddess; but, just in the midst of their lovemaking, the net fell upon the two lovers, trapping and immobilizing them, locked in a very private embrace. Hephaestus immediately walked back to his bedchamber with a host of other gods and exhibited them as they were naked and wrapped in each other's arms.

Her Roman equivalent is Venus.

Aphrodite appeared in the first game in the city of Athens, presenting one of the tasks Kratos must pass: killing Medusa by decapitating her, and using her gaze as a weapon. Once the task is complete Kratos must then use the gaze to turn a few minotaurs into stone. She then allows Kratos to pass and continue his quest.

Aphrodite was seen in bed, with her handmaidens, but when she sees Kratos, she tells them to leave. She attempts to seduce Kratos, telling him, "Even though you are no longer the God of War, you can still share my bed." But Kratos was not amused. Annoyed, she reveals how she yearns for a "real man" to meet her, but since Zeus refused to let the imprisoned Daedalus finish the bridge, she has not had her wish granted and she expressed how much she dislikes Hephaestus. That's when she realizes that Kratos needs those bridges fixed and tells him that she might give him information only if Kratos pleases her (he must have sex with her, though she gives him information even if he refuses). If he does, Kratos would be given a high amount of Red Orbs. While having sex with her, the handmaidens say Kratos has "such power" and later they begin making love as well. Aphrodite wanted Kratos to have sex with her again, but an impatient Kratos refused. Irritated, Aphrodite tells Kratos to go to Hephaestus for help instead.

It is unknown if Aphrodite or her handmaidens were able to escape the palace when Gaia's giant corpse destroyed all of Olympus, however, it's likely they couldn't and died because of it, since Athena counts herself as the only living god by the end of the game.

As the Goddess of Love, Aphrodite possessed many powers.

She seems to have a very carefree, yet promiscuous outlook on life. In fact, the only thing she cares about is having sex, and is actively neutral in the war Kratos is waging against the gods. This promiscuous nature seems more to do with the fact that she is the Goddess of Love, Beauty, Sexuality and Procreation, than it does with the opening of Pandora's Box. But after it was opened, the evils Lust/Vanity completely took possession of her which made the already sex loving goddess even more promiscuous than ever indeed.

She loves making love rather than do anything else. Her only benchmark, it seems, for having intercourse with someone is whether or not she finds the man attractive enough to sleep with her.

It is implied by her handmaidens that she is difficult to fully please sexually, due to her having so much experience in the matter (it's also most likely that she prefers having sexual intercourse with men, but since the bridges were nearly destroyed the only way to please her were her handmaidens). She was surprised when Kratos is able to nearly make her lose her composure with his own experience.

Aphrodite is considered to be flawlessly beautiful. She has long, auburn hair kept in a braid and pale blue eyes. Though she has in this new lifetime hazel brown eyes, hiding the pale blue that truly is her eye-color. Her body can be considered "perfect" since she is the Goddess of Love, Beauty, and Sexuality. She wears a revealing dress that exposes most of her body, including her perfectly sized and formed breasts (most likely to sexually appeal to mortals) and she is barefoot. Curiously Aphrodite's traits, like height, skin colour, slenderness and breast size seem to be a perfect in-between of the ones of her handmaidens.

Aphrodite speaking to Kratos in God of War 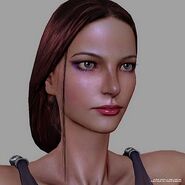 Aphrodite in Hephaestus' flashback in God of War III.

Aphrodite in the censored Japanese version of God of War III

Aphrodite with her handmaidens