Ancients are a race of elemental golems that first appeared as mini-bosses in God of War (2018).

Ancients are called such because they have existed since the beginning of time, stated to be lingering parts of the primordial being Ymir. With the exception of the one in Alfheim, most Ancients dwell in Midgard, usually hidden in its landscapes thanks to having bodies of rock.

Their bodies are composed entirely of rock and their respective element, consisting solely of a torso, a head, and limbs connected by a heart, lacking any sensory organs and having no mouth, thus are uncapable of speech. Regardless, they appear to be sentient creatures since they are aware of their surroundings and can engage in combat.

It seems Ancients usually hibernate for centuries, awakening only when they are disturbed from their slumber. They also seem to be peaceful creatures, since they don't attack unless provoked.

The Dwarves have a particular interest in the Ancients; a renown Dwarf alchemist known as Andvari saw them as potential beasts of burden and thus created a modification process that seemengly domesticated the soul of an Ancient, a process that unwillingly created the abominations known as Soul Eaters.

Outside of Andvari, the Dwarven smiths Brok and Sindri are able to craft equipment with the harvested hearts of Ancients for Kratos.

Being made of rock, the Ancients are sturdy creatures impervious to any damage, their singular weak spot being their heart, a heart that seems to be the energy source of the Ancients.

The Ancients expose their heart when attacking, firing energy beams and rock projectiles charged with either ice or fire, but if Kratos manages to hit their heart, rocks fragments will fall off the Ancient, fragments that Kratos can throw back at them to cause them heavy damage. 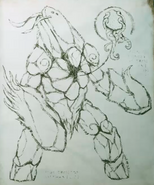 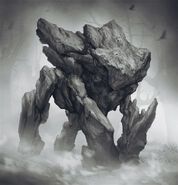 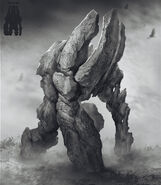 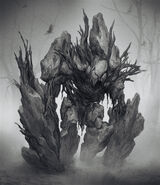 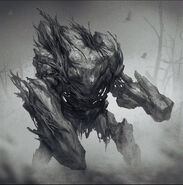 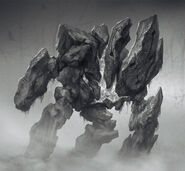 Retrieved from "https://godofwar.fandom.com/wiki/Ancients?oldid=117681"
Community content is available under CC-BY-SA unless otherwise noted.