God of War Wiki
Register
Don't have an account?
Sign In
Advertisement
in: Items, God of War II, God of War Collection,
and 4 more
English

Amulet of the Fates

The Amulet of the Fates was a relic that belonged to the Sisters of Fate and was found by Kratos in the Temple of Lahkesis, in God of War II.

When used, it causes everything around the user to greatly slow down and take on a green hue, while the user continues to move at normal speed. The amulet, however, could only be activated when it was close enough to a Fates Statue. 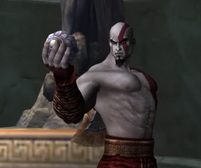 Kratos with the Amulet of the Fates.