God of War Wiki
Register
Don't have an account?
Sign In
Advertisement
in: God of War: Ascension, God of War Series, Kratos' Weapons,
and 4 more
English

The Amulet of Uroborus was an item that was used by Kratos in God of War: Ascension. It was a golden amulet that was built around a blue-green gem that could manipulate time in a variety of ways.

The Amulet did not exist in Mythology, but Ouroboros was an ancient Greek Symbol and was used specially in alchemy.

The symbol was a serpent or dragon that bit its own tail. It represented eternity, evolution (turning back to itself), movement, continuity, self-fertilization and, consequently, eternal return.

The Amulet belonged to Oracle Aletheia, but was stolen by the false prophet Castor and Pollux. The brothers used its powers against Kratos, but he defeated them before he claimed the amulet for himself. He tried to heal the mortally wounded Aletheia with it, but she told him that it couldn't heal her wounds and left her to die peacefully, but not before she told Kratos the plans of The Furies and the way to the Statue of Apollo. With the ability to decay buildings or rebuild them, Kratos used the amulet to solve many puzzles through the game, including on the island of Delos to reconstruct a structure that was previously destroyed by Alecto. After Kratos was captured by the Furies, the Amulet of Uroborus was held by Megaera. Following his escape from the Prison of the Damned, Kratos killed Megaera and reclaimed the Amulet to reconstruct several structures in the prison. He would later use it one last time to stop Alecto's tentacles from striking him.

By manipulating time and space, the Amulet of Uroborus was capable of rebuilding enormous structures, such as the Statue of Apollo and large sections of the Hecatonchires. When activated, the area near was glowed Green. When it was used to rebuild something that was previously broken, Kratos got close to the object that he wanted to heal/decay until a green glow appeared above his head. When the Amulet was active, Kratos could make broken pieces of structures float in the correct places for him to proceed, or reversed the space to solve puzzles in different ways (such as in the broken water wheel). In the first demo of the game, Kratos needed to stay in a green circle in order to manipulate the object with the Amulet.

The Amulet could also be used in combat: if the green beam hit an enemy, they were slowed down (smaller enemies also levitated) for a few seconds, and therefore, left them open to combos. That power was especially useful when it was used against big enemies, like Elemental Talos (when they're not invincible): if they were slowed down a moment before they performed a strong attack, the attack was canceled and they were left open to combos from Kratos for a short time. Some bosses could also be slowed down, but their attacks weren't canceled. 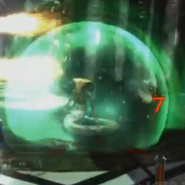