Aegaeon was one of the three Hecatonchires and the first boss in God of War: Ascension. He was the first to break a blood oath with a god and to be punished by the Furies, becoming a titan-sized living-prison called the Prison of the Damned. One of these prisoners is Kratos, who is imprisoned in the Hecatonchires by The Furies as punishment for his crimes.

The outline of Aegaeon in flashbacks depicts him as a giant with six arms with twelve smaller arms on his six arms.

Aegaeon (also called Briareus) the Hecatonchires was one of three giants of incredible strength and ferocity that surpassed that of all Titans whom they helped overthrow. Born from Ouranos and Gaia, along with his two brothers Cottus, and Gyges. Their name derives from the Greek ἑκατόν (hekaton; "hundred") and χείρ (kheir; "hand"), "each of them having a hundred hands and fifty heads". Hesiod's Theogony reports that the three Hekatonkheires became the guards of the gates of Tartarus.

In God of War Series

After the Great War against the titans, Aegaeon pledged a blood oath to Zeus only to later betray him. The Furies weren't pleased by this betrayal and thus hunted him down to torture him without end, as they saw death would be too merciful for such a crime. He became an example to all, and his body a prison for those who followed his example.

Six months after he was tricked into killing his wife and child, a younger Kratos finally finds a way to break the blood oath that binds him to the God of War, Ares. After taking matters into his own hands, Kratos is sentenced to a life of madness with the Furies, caged within Aegaeon himself, until he would return to the service of the God of War. As he escaped the torture of Megaera, he chased her in an attempt to find the exit of this damned place, only to be attacked by her minions and later by the prison itself.

The parasites used by Megaera enter an arm of the Hecatonchires, which causes the fingers to mutate and grow while a sixth finger sprouts from the hand. Moments later, a monster with giant tusks and claws bursts out the palm of the hand, and four of the mutated fingers (the two in the middle are turned to its back) become insect legs. During this first confrontation, the environment changes, similar as it did during the first boss battle in God of War III. Kratos ended this battle by slitting the monster's throat with its own claw.

During a second battle, an arm splits in half to reveal another monster similar to the first one. It uses the two halves of Aegaeon's hand as claws. The monster throws Kratos through several prison cells before continuing the battle. During the battle, Kratos weakens the monster by letting parts of the prison crashing down it twice before pinning his hands and chest to three spikes, one each, and then snapping its back.

Suddenly, one of the many hands grab the body of the dead creature and Kratos. It puts them in the stomach of the giant. Kratos awakes and start to go up through a giant intestine-tunnel like, but in his way he finds Megaera, who sends new breeds of infected dogs to kill the Spartan. Kratos quickly kills the new abominations and start to go up again.

In his way to escape of the prison, he almost fall in the sexual trap of one the Furies, Tisiphone, but discovered her trick and tried to attack her. Meagera appears and pushes Kratos through the wall, making both fall on another platform. He takes the battle to this platform in front of the giant's open mouth, while Megaera watches him on Aegaeon's left eye.

After killing all of the enemies in the platform, Megaera declares that Kratos had caused her pain for the last time. She creates more parasites, which burrow under Aegaeon's eye. His dormant face's skin starts to crack. Aegaeon's head mutates into a horrific monstrosity with insect-like mandibles around his mouth and sharpened teeth, who seeks to kill Kratos.

After escaping from the head, Kratos falls on another platform of the Hecatonchires, and the head appears once again. On the other side of the platform, a third Infected Hand appears, helping the head to corner Kratos. The Spartan attacks the Infected Hand and then stabs his Blades in its eyes and climbs on its backs. The blind and angered Hand still tries to attack Kratos, without knowing he's behind it. Kratos rides this Hand by stabbing its backs, which makes it attack the giant head, cutting some of its limbs. Then, he pushes the Hand into the mouth of Aegaeon, which bites it while being stabbed in the cheek.

In a quick movement, Kratos jumps towards Megaera, who was still on Aegaeon's eye, while the Hand dies on the Head's mouth. After a short fight, Kratos stabs the Fury's chest, making her fall from the Head, and he falls after her. He finishes her life by stabbing her chest once again as they reach the ground.

Aegaeon dies with Megaera. With his death, he was freed from his suffering and could finally rest in peace.

Throughout Aegaeon, three interesting pages were found on the floor. Apparently, they were all written by a same and mysterious Scribe of Hecatonchires. Their text has been copied below: 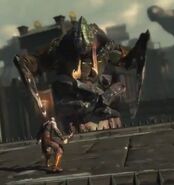 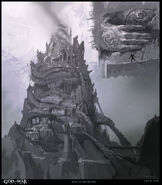 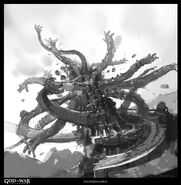 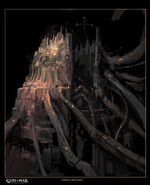 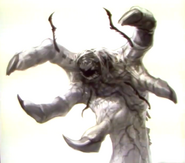 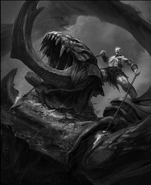 Add a photo to this gallery
Retrieved from "https://godofwar.fandom.com/wiki/Aegaeon?oldid=110032"
Community content is available under CC-BY-SA unless otherwise noted.