What's on your mind?

HELL STRAIGHT UP YEAH, MOSTLY ZEUS ✋️
NO, Turn the Other Cheek

Started playing God of War on ps4 and got stuck here. What should I do?

Just curious. hope this doesn’t get flagged. But I just gotta know…

Think about it. Both too angry to die. Both swinging an AXE that COMES back to them. Both have something by to do with ODIN and/or RAGNAROK.., I mean. It’s an even matchup. But. I’m sorry marvel. But I’m choosing my boy.. (or… a MAN * in Draxs voice*) Krate lol.

What would the blade look like if it had a nordic style similarly to the blades of chaos??

So guys I’m watching uncharted rn and I was wondering. How would you guys feel about a god of war movie. And who do you think would be a good fit to play his character?

Could someone please correct in Kratos' biography and personality the fact that visions no longer plague him? 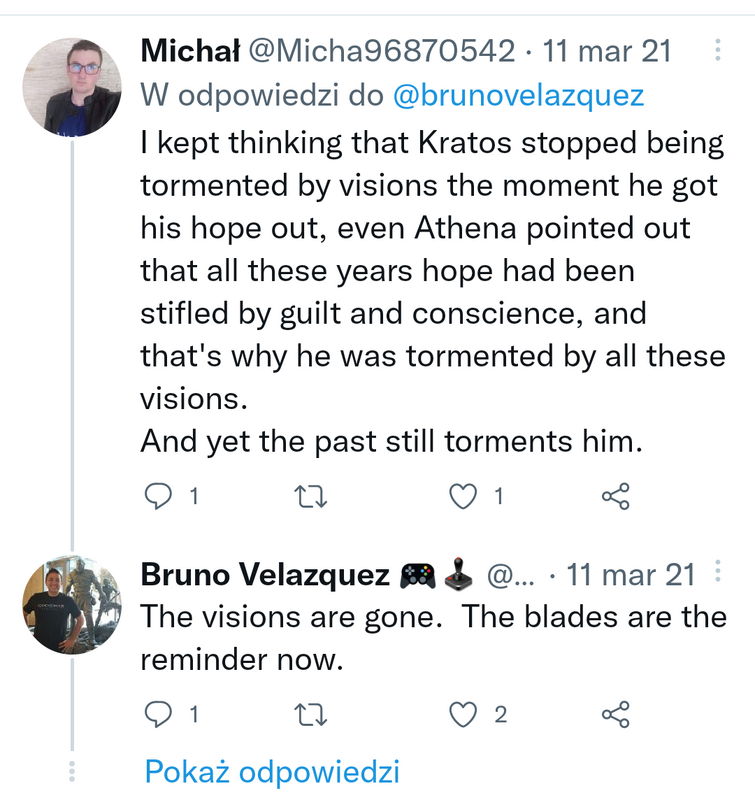 As confirmed by Bruno Velazquez aka Animation Director at Sony Santa Monica. 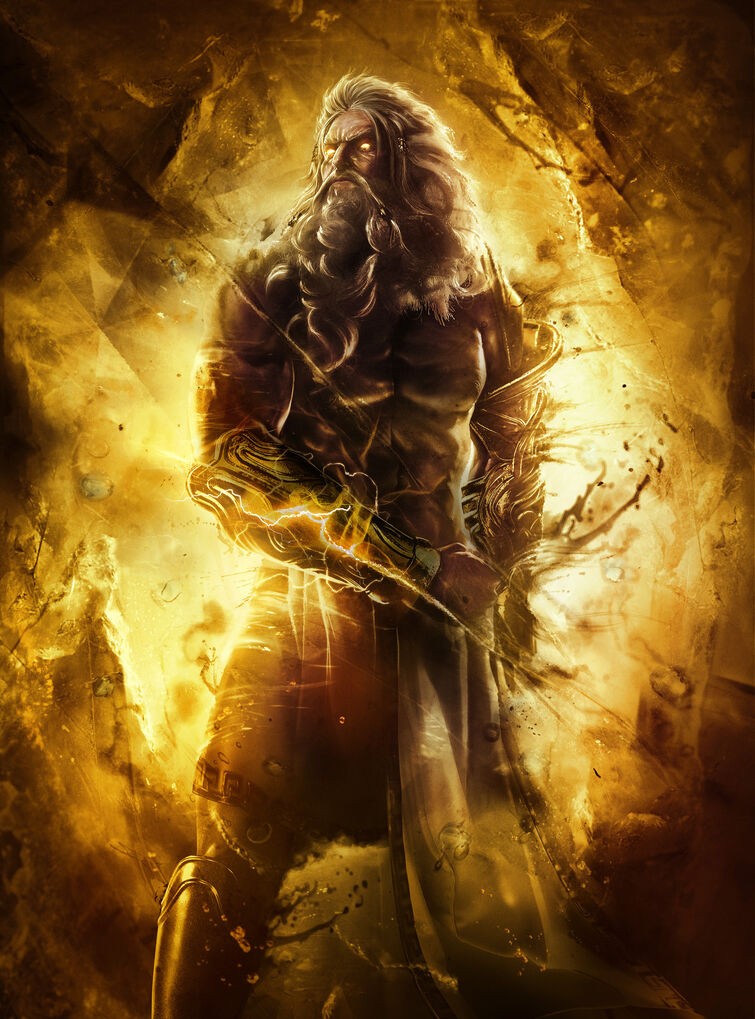 One of the major reveals in 2018's God of War takes place in Jotunheim, where Kratos and the boy find murals that accurately depict their journey up until that point. As Kratos looks towards the end of the panels, the torn cloth obscuring the last image is briefly lifted up by the wind, revealing an ominous scene that fans are still debating today. At first glance, the image seems to be depicting a lifeless or injured Kratos in the arms of a devastated Atreus, implying that Kratos will die in the near future. Upon taking a closer look, however, fans will see that the figure does not have Kratos’ signature markings and is even wearing different clothes. This might be a deliberate way to mislead fans into expecting Kratos’ death in Ragnarök when it’s highly likely that Atreus is mourning someone else in that image.

Have you guys got any predictions for the upcoming God of War game? Or maybe theories about how the game is going to go? Or just what you want to see in the game.

Prediction: Kratos will temporarily die and go to Valhalla, where we have to fight our way out again.

Theories: It's not Kratos in the mural, it's Tyr. (Popular theory, I know!)

Want to see: More Mimir tales!! They're the best.

I would like to play it with the Greek titans and gods , and Norse Jotunar and gods, my pick would be the boulder titan and Hercules for Greek and Magni and ymir or sutar the fire giant.

I can’t be the only one who actually misses playing the old games, back when Kratos was a blood-thirsty animalistic God killing machine.

I felt nostalgic when playing God of War 4 but a part of me, seeing Kratos being old and tired, idk… Made me sad

Do you guys think that Atreus will grow a beard when he’s older?

Isn't there another way to reach the chisel under the Ice instead of going to all that troubles to reach & drop a goddess hammer to break the Ice? 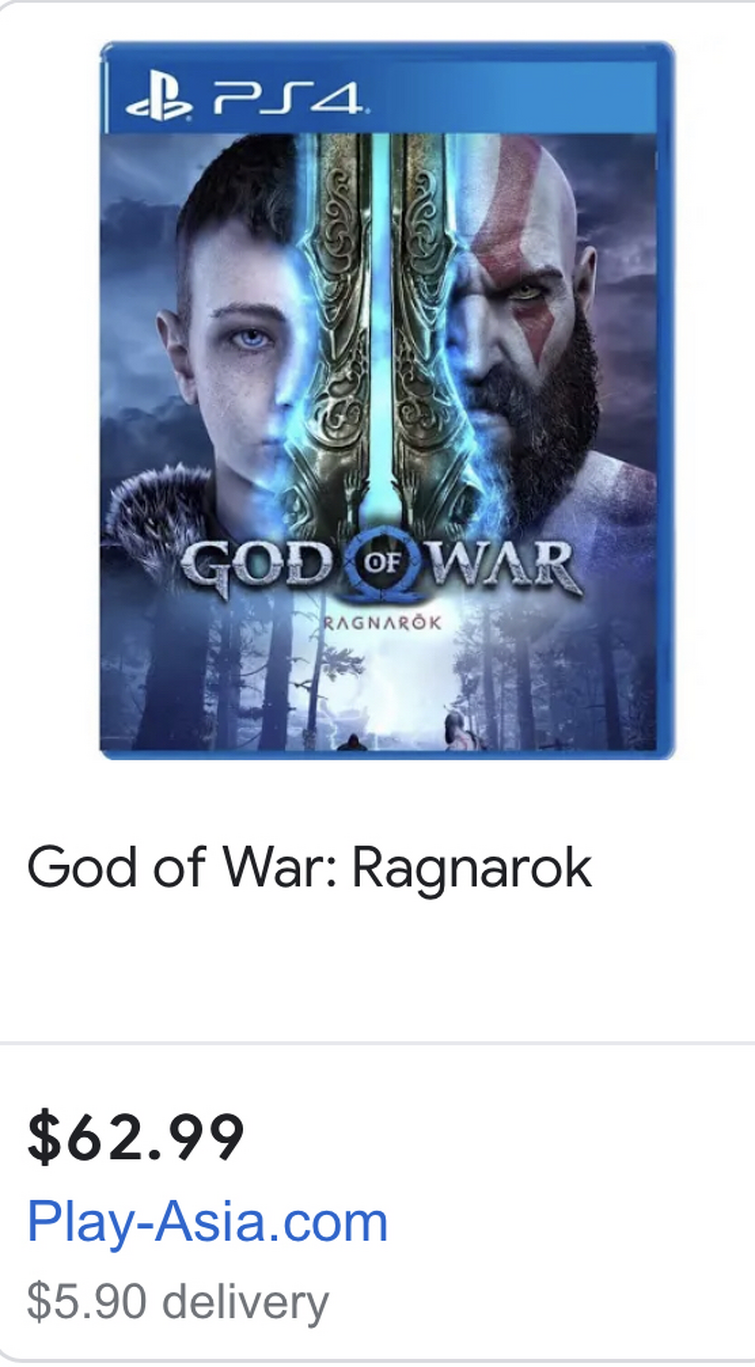 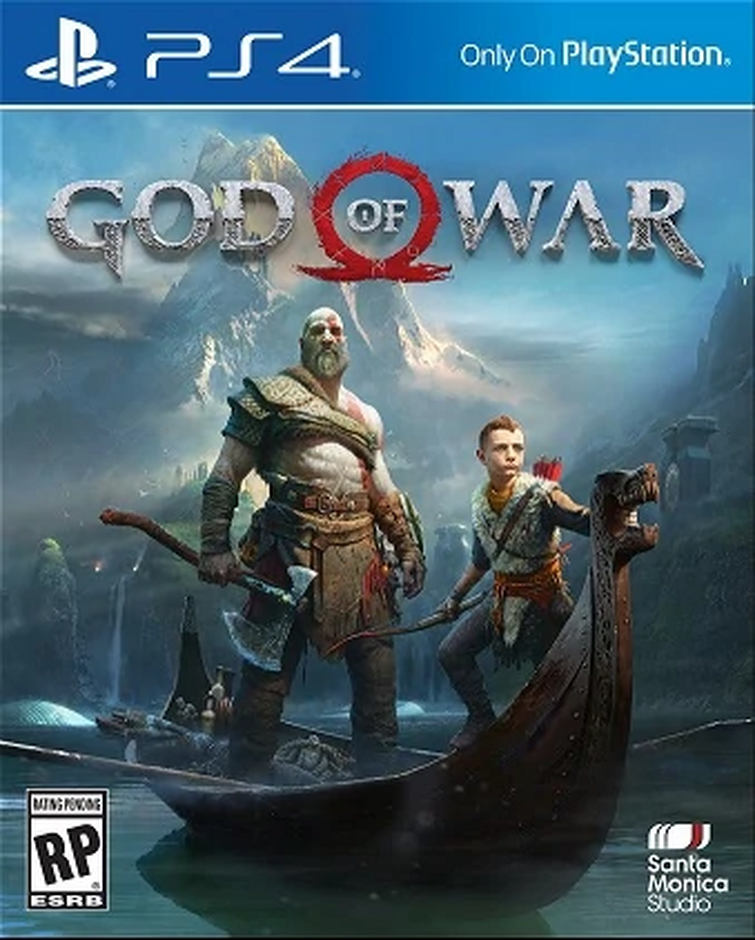 God of war 4 or God of war 2018 is one of the most amazing video games that Santa Monica has brought us, leaving aside ancient Greece and entering Norse mythology, where Kratos and his son Atreus must make a trip to spread in Jotunheim the ashes of the late Faye.

However, as in any video game. God of War 2018 leaves us with some questions that fans still have about the lore of Norse mythology in the God of War universe.

1_ Why is Hræsvelg located in Helheim? 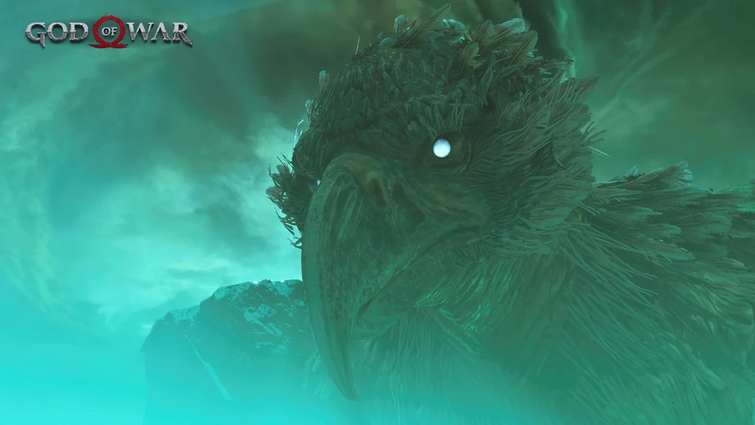 When Kratos goes to the dark and cold Helheim to search for the heart of the bridge to heal his son, we meet Hræsvelg, a giant eagle, who throughout the game does nothing but stay neutral in the face of all events.

However, the strange thing comes when we find out that this bird is in Helheim, since in Nordic mythology this being was at the top of Yggdrasil, whose function is to cause the wind to arrive in the 9 kingdoms.

Then... Why is Hræsvelg in Helheim? Has it always been there? Or was he exiled to that place?

2_ Why didn't Odin turn to the Norns? 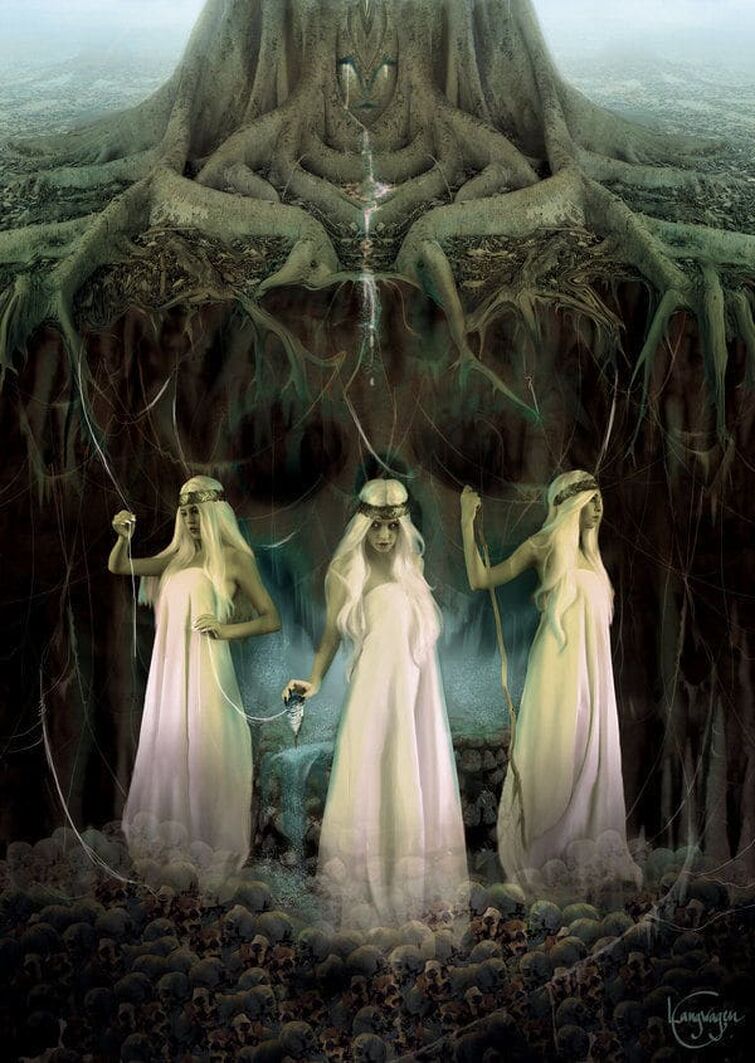 During the game it is made clear to us that the leader of the Aesir, Odin, has a single purpose to stop Ragnarok.

To do so, he resorts to the extinction of the Jotnar, since they are part of Ragnarok and acquires more knowledge about what will happen at the end of the world.

However, there is no mention at any point in the game (either through Mimir or the murals) that the god seeks help from the Norns.

something strange, since they are in charge of writing the destiny of all living beings, including the gods.

This becomes even more strange considering the Norse mythology, where Odin had to go to them to know the runes, with this added it makes one wonder if Odin actually came to visit the sisters at least once or if he knows of them.

3_What does Thoth want?

In the fourth Fallen God comic we meet the god Thoth, an Egyptian god who embodies wisdom.

What does make us wonder is, for what purpose does he want Kratos? Since in an interview with Cory Barlog he said that Athena was not there, so this leaves us with more doubts about why the god appeared to Kratos. 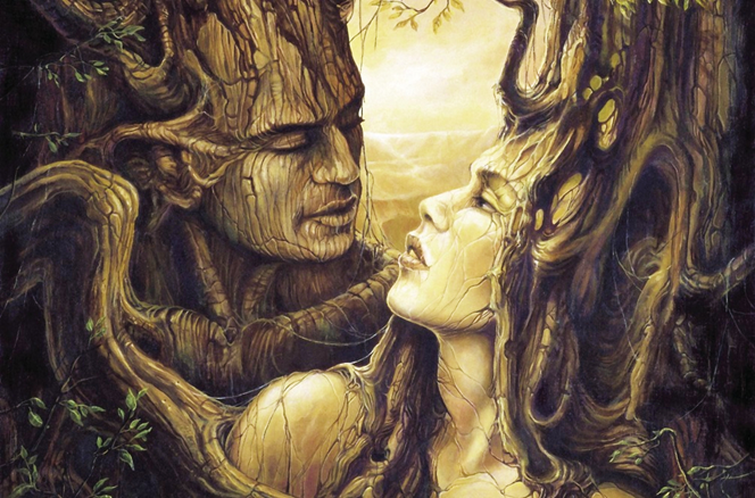 In the novel of God of war II we are left in revelation that Gaia is still alive after dying by Kratos, since the following is said "Gaia's physical form is not linked to her true ethereal form, which exists as an embodied spirit: the Earth itself, so he was able to communicate with Kratos and observe every moment of his life, even after the War of the Titans."

If it is true, that does not mean that Fjörgyn does not have the same abilities as Gaia, and that he is not actually dead, however we must bear in mind that we are not mentioned that Thor's mother is mother earth, so this is in doubt.

5_Why did Faye ask Kratos and Atreus to dump her ashes in Jotunheim? 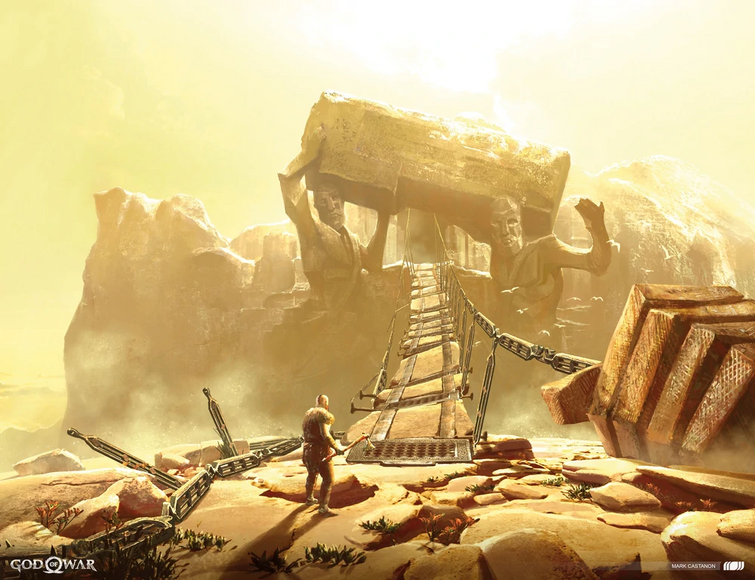 In the 2018 game Kratos has only one goal to spread the ashes of his late second wife Faye on the highest mountain in the nine worlds.

Still, there are doubts as to why exactly Faye asked Kratos for this before she died, according to theories it is believed that she did this to revive the previously dead giants and start a war against the aesir, but the latter is left to personal interpretation.

6_ Why is Angrboda Egyptian? 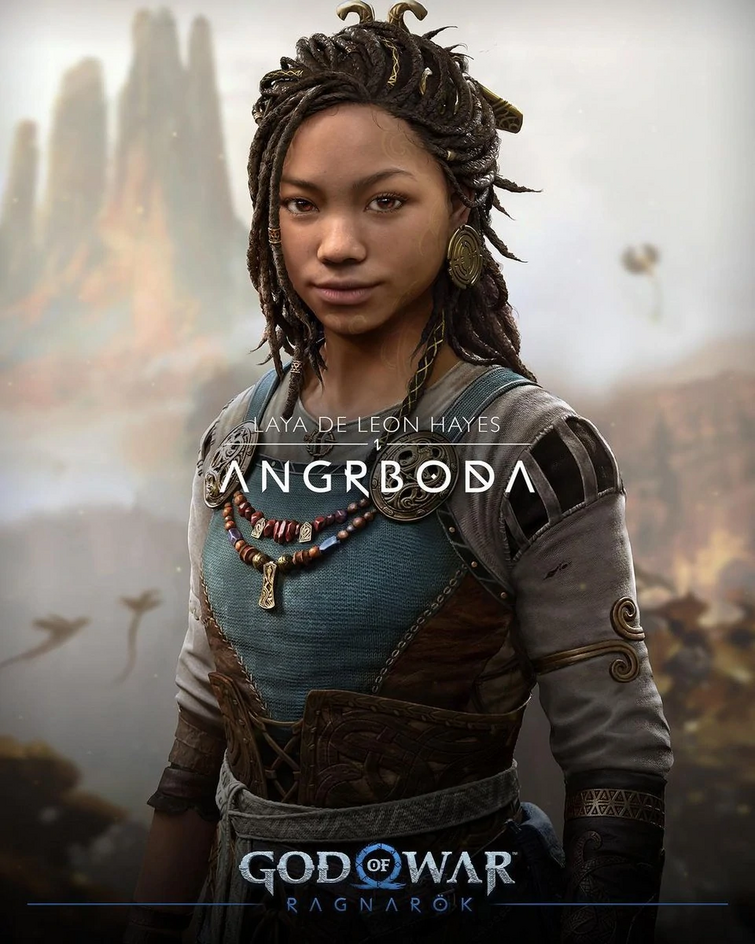 In the trailer for god of war: Ragnarok we were introduced to Angrboda, the future wife of Atreus/loki

During the last games it is made clear to us that traveling between mythologies is normal in a sense and in the other mythologies they are known by other names than their native lands, so the question arises.

Who is actually Angrboda? Was she previously a goddess like Kratos?

7_ What happened to Hel? 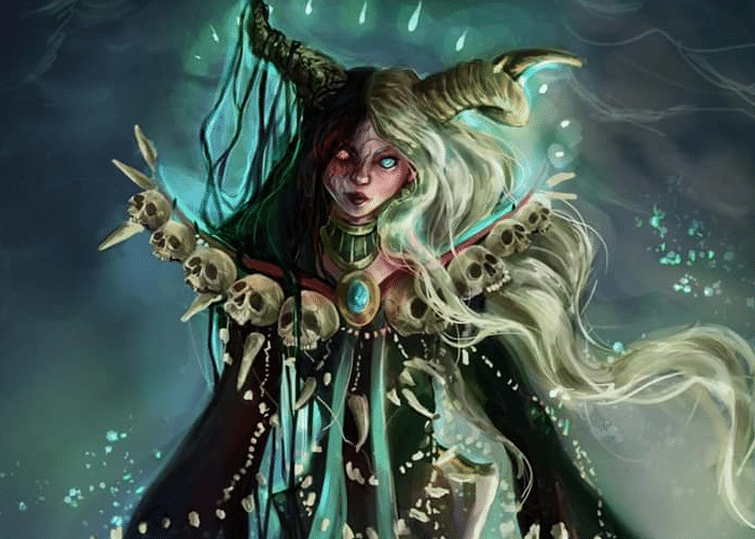 In God of war 2018 it is made clear to us that the children of Atreus traveled in time long before they were born, and during the game we were shown that there were Fenrir, Jormungadr, Sköoll and Hatty, but... and Hel?

Her fate is unclear, as we were given no clue that she was seen or that she traveled through time.

In the Ragnarok of mythology, his fate is not mentioned, so there is something ambiguous that happened to him